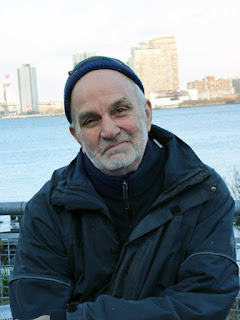 Brian Richards lives in a small cabin, sans electricity or phone, on a ridge overlooking the Ohio River Valley. He is the sole proprietor of Bloody Twin Press, a letterpress operation which has published books by Tom Clark, Ted Enslin, Skip Fox, Howard McCord, Christy Sanford, Anne Waldman and many others. He has published a number of books of poetry, most recently Enridged from the University of New Orleans Press. 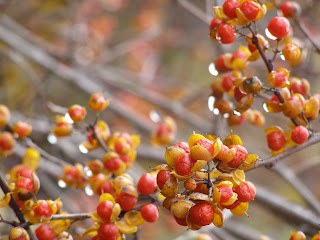 She is free-
climbing a monolith thirty feet or so above a brushy slope
its angle of ascent maybe thirty feet the wrong side of vertical
Sunny day behind and below but just her hair
the anterior surface of her upper left arm
her left thigh muscle, the outside of her left knee
the top of her left calf are splashed with light
The toes of her left foot are lost in a divot
heel in space, left calf almost horizontal against the rock face
sinews strained to hold the weight striated with light
as are the leaders above the knee
thigh angled down almost forty-five degrees off plumb
Her right thigh a sliver of light along its top locked to the curve of the rock
knee almost out of sight, lower leg in space
triangle between her thighs and the rock close to equilateral
but for the bulge of her pubes shading into the dark crack between her cheeks
their compression spring holding her lower body in place
Her torso is parallel to the face a foot away
her left arm horizontal shoulder to elbow
forearm vertical to the knuckles lifting her small breast
erect nipple almost in touch, fingers in a crack
face-to-the-face profile utterly focused
Her long loose light hair provides a plumbline that preserves the thirty-degree angle to her back
just her right forearm visible above her head
hand a foot higher than the left clamping a narrow crack
and almost to the top of the frame
How far she has to climb is impossible to say
but she is apparently unconcerned with ceilings 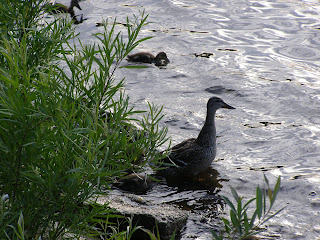 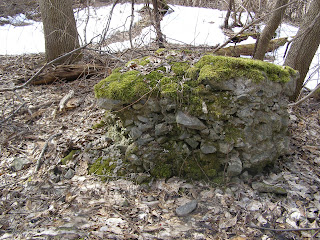 Chipmunk a peripheral imposition
afterimage headed into the den beneath
one of the treated six-by-six sills that found
the outhouse
the eye never catches
up but plots a path to satisfy
that indiscrete stroke traversing
the tangential kiss of what I can say I saw
Posted by Alan Casline at Thursday, May 03, 2012