tree root and tree crown balance
“Healthy roots, yer gettin’ quite a deal there.”
the expanse of the leaf crown
at edges where branches reach—
a dripline
place to water  & fertilize newly grown roots

ax the “re” from all words
each moment new
as gangs of sages knew
splendent and splendent
and splendent new.
shine on the rootless birds
mountains were rootless birds
in the very beginnings
the roots of the mountains
that hold them in place
calmed the chaos
clouds on their slopes
are remnants of their wings

where we stand, up or out

further and forth as up the evaporation goes


note: A literary form I invented is the "tour of a poem." Starting at first line of the poem you are touring you write along with the poem as you read your way from beginning to the poem's end. The tour itself consists of impressions, reconfigurations of the poems line, echoes of content, flights away from the original poet's text, some back talk if you are in the mood, kenning and lines directly quoted.  I have taken the tour of a number of poems over the last few years. Not a study or a critique more a trip over a poet's landscape by an active observer. 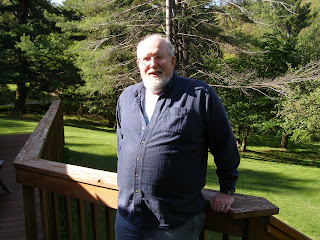 Casline at Cloudburst
Posted by Alan Casline at Saturday, May 26, 2012