Somewhere between two coasts
god is throwing a party
there is fuck you in the air
and sweet wine in the snow.

The white queen gossips
about valley girls waking up alone.

The beats shotgunning beer
argue there is no future only an infinity of options.
Squirming facts eavesdrops.
My poems are not poems
it was the shadow we thought shouldn't be.
Mark Twain interrupts, is there take out from Mockba?

And the white queen, who is also a former social worker,
talks about children playing in the Trinotite sand,
little girls with soiled bandages
other children who dare in Anatolia.
And the marmalade acolyte shouts, Dear Lord,
don't call Social Services about this!

The Gunslinger takes a long pull from the bottle of Jameson's
and gestures wildly about the room with his 44,
settles his glare upon Horse asks, What do you think?
Whale …..............(drags out the word for a full minute and the Dahlai Lama joins in) finally says
there is a conspiracy of dust and pissed off elephants.
Women are the first environment
honor the sacred directions
always
sisters
even as just another American woman walking alone.

Charles Olsen asks, can I hunger for protein and justice?
You guys are nothing but slaves of appearances savages the acolyte
everyone in this country is a sort of Johnny Carson!

Are there any more Pacman Pistachios?
I'm married to the flywheels and gears.
Coyote always gets into trouble,
gambols with the dogs of the house.

The Muses have emerged from the dark
from the chaos
yeah, in a
big
god
damned
car.

Somebody feed the snakes!
The more ways out the harder to plan your escape
Take the beaten path to old man Slates still.
Fox, coyote, elk, buffalo and the Lakota elder
pay no attention to the stoned deer.

Franco likes Ike
something the color of puma in Minnesota
the righteous dude
with the attitude
tries the limits of sarcasm, delights cartoonists,
Joe recites warm underbellies
chickens, shit,
and make your own scratch.

The shades toast dead ed with coffee cups; happy birthday!
We may gain the secrets
what are your favorite things?
In my hand a snack I'd never seen.

Marge Merrill
Posted by Alan Casline at Tuesday, May 23, 2017 No comments:

Workshop: For those not on exploration in the same time slot workshop in the main lodge (optional)
Therese Broderick will be doing a Workshop on different ways to create handbound books
Materials will be supplied. Martin Willitts, Jr. will also show his way of bookbinding.

Keeping Still: Find a spot and stop. Sit still for at least 15 min. but do not check the time (optional)

This was first a poem and then a survey of about 30 poets to get their opinions. I’ll throw this out as a bone to chew on. I was intereted in who would be the most original poet. A couple of these debates have been ongoing in my poetic life.
---  Alan Casline

CLOUDBURST 2017 ON A DAY OF MELTING 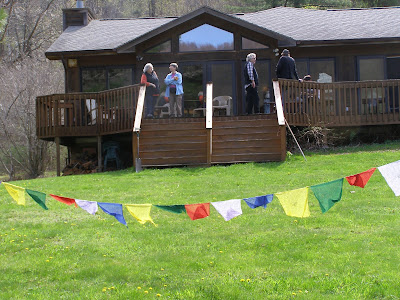 On Saturday May 14, 2016 at CLOUDBURST COUNCIL as a group around the table we threw our I Ching Hexagrams which were #59 (Dispersion) changing into #6 (Conflict).  At my first glance, I was uneasy over CONFLICT being a touchstone for our continuing work at the Council, in poetry and beyond. I did know the changing nature of the Tao and the I Ching meant the hexagram CONFLICT was not so much about conflict as it was the forces in movement that allowed conflict. Conflict as a theme for our gathering has some background via national politics and cultural clash. The hexagram has two pieces (the tri-grams) that make it up. These are on top The Creative, Heaven and on bottom The Abysmal, Water. These two halves move away from each other and this the I-Ching says gives “rise to the idea of conflict”. Notice not like a Cloudburst where forces crash together but “Conflict develops when one feels to be in the right.” Back to the two tri-grams that make up the hexagram CONFLICT, Creative is strength and the Abysmal is danger, guile. The indication of conflict is the combination in a person of deep cunning and fixed determination. Here is starts to feel like current events “To carry on the conflict to the bitter end has evil effects even when one is in the right, because the enmity is then perpetuated.”
In my own book 64 Changes, I can see what I drew out of the day I threw the coins and that particular poem for hexagram #6 got written.   the spiritual trends/of individuals harmonize. The CLOUDBURST COUNCIL was born out of conflict if everyone remembers the first Friday night at the Gell Center. Some poetic conflicts might never end but I do think this harmonizing of spirit that very soon at the first Council and over the years of getting to know each other has occurred. To everyone’s credit and to our future enjoyments.
The causes of Conflict are latent in the opposing tendencies of two different forces.  The I-Ching commentary says to avoid conflict you have to catch it before it starts, in the beginning. “If rights and duties are exactly defined, or if, in a group, the spiritual trends of the individuals harmonize, the cause of conflict is removed in advance.” So practically, in organizing CLOUDBURST COUNCIL are there any potential conflicts that need to be addressed in the beginning?