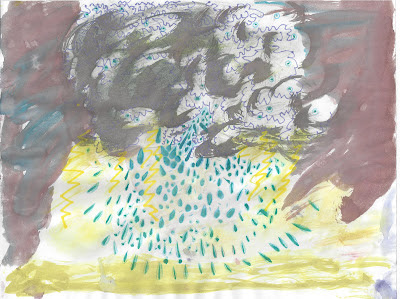 When the ‘Friendship Among Poets’ chord for Cloudburst Council was struck several months ago via Alan Casline and Kenneth Warren, Stephen Ellis wrote the following suggestions to Warren as an initial response:

"Friendship among poets' strikes a decent chord with me.  Baraban vis-a-vis Tirrell seems really good and true, but then also Al Glover's long-standing relationship with John Clarke, that put the Curriculum of the Soul on the map, etc.

This brings to mind the sense of those in Sufi orders calling one another 'friends,' too, so that 'cloudburst' is in many ways the 'magic citadel,' the 'rock from which the language springs' as well as the 'rock' on which Jesus told Peter to build his church (not to even mention Hasan-i-Sabah’s fort/temple Alamut - also built on high rock – the Isma'ilis, and the entire alchemical blend of magic, belief, creation and politics - the whole ‘rose/eros’ almost ‘fortress’ mentality of the Heart opening to inspire closure around its fragilities and clear toughness), that has always been, or my sense of it, anyway, very basic, geologically, like 'groundwater – having always to dig all the way down to it -' involving for me that Greek word Clarke mentioned somewhere in 'From Feathers to Iron' - 'symplegma' - that is not easily transferable to English, but which carries the sense of 'sympathetic plasma' with it, throughout and among us (fluidity, and the combined flavor of the opaque and the transparent that mix as one’s fluencies): To go back to Sufism, and Islam, it behaves like the 'sap' that runs through all things, 'fire,' 'vision,' call it what we will.  With the deeper evidence beneath the Occupy Wall St movement currently in effect in Syria, where people are actually being killed for this fluid 'emergence,' one might well take up this 'binding elemental'  sympathetically, the 'plasma' and the operable 'stuff' of poetry (and life, etc.,and simply wonder out loud how it works, how the withering Grail King finally figured out (again), that, you know, Oh!  That you do it for, with and among 'your people.'  That would constitute the reality – the 'excessive actualism' - of the Gift, potlatch being basically a rural,or small urban neighborhood phenomenon, and plausibly in that proportion of 'Rootdrinker' interest.  But friendship betrays any overall 'political' situation among groups and persons, and that's the point, anyway, for real friendship is corrosive of any 'idea' that would usefully accumulate anything more than the Shelleyan 'collected lightnings,' so that 'friendship' can never get beyond anything but endless charge and discharge, across whatever cultural grid you got.

If 'friendship' is to be a topic, someone really ought to get it together to talk about Blaser, and those later poems dealing with 'great friends,' Duncan and Spicer, of course, but also Dante, etc.  I mean, the book on that - that sort of friendship - would really be Blaser's neglected 'Even on Sunday,' with its 'recovering the public world' flavor.  That ought to be good for at least a presentation or talk, if not an entire panel.  Or, shit, that would be a solar panel, truly.  And then, there's that book of translations out of Rumi's soulmate Shamsuddin's prose writings, called 'Rumi's Sun,' which has much to do with the mechanism of Vision, and how it must always be made flexible and human . . . and funny (funny ha-ha and 'funny' strange).

So.  This is what I'm thinking at 2 AM, preparing to steam a pound of cod.  And having mentioned this, remembering McNaughton's quote about somebody finally getting down to putting some squid on the table: Isn't that what a thing like 'Cloudburst' ought to really be about?  That is, at least bringing 'something' to the table."

Several months later, as planning for Cloudburst began to coalesce, Ellis sent Ken the below as a ‘Friendship Among Poets’ addendum

“No one has said the word 'love', yet, so there it is.  The result of such 'giving' really ought to be surplus, not just look like it, or how one occasionally gives a glance that way.  If there is communal as well as personal power in the coil of the shaman, it is the power to bind persons together by somehow combining their unlike minds into some kind of usefully 'unified' field, perhaps nothing more than the surplus that flows out on end and feeds the other, that is, the other end of another 'other.'  That is, 'exchange' is not actually about 'equality,' but rather has a lot more to do with Value, in that giving the 'thing' is part of the whole incipient and on-going occasion.  Well,of course one can't just blab on like this as part of a panel.  I would like to 'say something' perhaps less than a cloudburst at Cloudburst, but I've yet to focus in on anything beyond the contrast of Sufis evidently being able to milk so much 'juice' from such dry tundral and desert environments, in some ways similar to the cultural context in present-day America.  Sun Ra is lucky his band's teepee hideout group home didn't at some point get fire-bombed like the MOVE headquarters in Philly did.  Remember that bumber sticker from a few years back, YOU GOT MILK?  Ultimately, that ain't no joke.”

To which Ken replied:


”I'm with you, babe. I was just covering respiration on the Titanic and the I-Chinged genome yesterday with another friend. My point:

Your account is solid, and your inclination to hold these "self-evident truths" loosely is wise. Otherwise the archons will bear down too forcefully on the psyche, I would suppose, giving the ego an undeserved altar for its own self-suffocation. One must always posit excess and exit via the breath as prayer. Otherwise there can be no sacrifice and the suffering will remain without ether - existential and impoverished.”
Posted by Alan Casline at Saturday, April 14, 2012